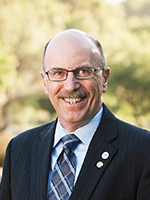 Bill Clarkson is a 1993 Graduate of Leadership San Ramon Valley. He was elected as the Mayor of San Ramon in 2011. He was raised in Oakland and received a Masters’ Degree in Business Administration at San Jose State University.  He is married and has a married daughter.

Bill is a small business owner, and began his company in San Ramon in 1978. His real estate firm, Clarkson Santoro, is the longest continuous owned real estate brokerage firm in San Ramon. He was awarded the “Business Person of the Year” by the San Ramon Chamber of Commerce in 1997 and by the Contra Costa Business Council in 2002.

Bill was elected to the San Ramon Valley Unified School District Board in 1998 and served three terms, including three times as the Board President. Bill also has a long history of service with the San Ramon Chamber of Commerce, serving on its Board of Directors for 11 years, including one as its Chairman of the Board in 2008.  Bill has served in a number of positions with the City of San Ramon. He was a member of the Housing Advisory Committee, serving as its Chair in 1994. In 1998 he was a member of the City Charter Commission, and was a Parks and Community Services Commissioner from 2009 to 2011.

Bill is also a long-term San Ramon Rotarian and enjoys its opportunity for community and international service. In 2000 Bill traveled to Africa with a Rotary International team to administer Polio vaccinations. In 2010 he helped to found the Dougherty Valley/San Ramon Rotary Club, and served as their Charter President

Aug
25
Thu
5:30 pm Class of 2023 Orientation
Class of 2023 Orientation
Aug 25 @ 5:30 pm – 7:00 pm
Alumni and Board members mix and mingle with the newest class of LSRV participants.  The orientation kicks off with introductions and testimonials from alumni.  Light refreshments served.  All alumni and new class invited. Chairs:  Bill Clarkson
Sep
1
Thu
8:00 am Foundations of Leadership Day
Foundations of Leadership Day
Sep 1 @ 8:00 am – 4:30 pm
Successful communities require the stewardship of broad-minded, well-educated, forward-thinking individuals acting in unity to promote the cumulative interests of a greater goal. Because leadership starts at the individual level, the “Foundations of Leadership” day kicks off the program with understanding each participant’s strengths identified using the Clifton StrengthFinder assessment.  Intermixed throughout the day are opportunities for developing relationships with other program participants and building the foundations for a strong sense of team and group identity. Day Chairs:  Kathy Chiverton, (Lead), Bill Clarkson, Mitchell Hopson, Henry Perezalonso
Oct
6
Thu
8:00 am Leadership Retreat
Leadership Retreat
Oct 6 @ 8:00 am – 5:00 pm
The retreat is an opportunity for class members to get to know one another on a more personal level and beyond the traditional boundaries of communication. Team building exercises focus on fundamental team development skills, empowerment, and the creation of synergy and trust among the class participants. Participants should wear comfortable clothing and shoes. Day Chairs:  Randall Diamond (lead), Christopher George, Andy Li, Henry Perezalonso
Nov
3
Thu
8:00 am Healthy Community Day @ San Ramon Regional Medical Center, South Building Conference Room
Healthy Community Day @ San Ramon Regional Medical Center, South Building Conference Room
Nov 3 @ 8:00 am – 4:30 pm
The goal of this session is to explore some of the issues facing families, children and the elderly in the San Ramon Valley. Through the fieldwork and class discussions, the program participants will discover what resources are available to address these issues, as well as identify how to access these resources. It is also a day in which volunteer opportunities with non-profit human services providers are discussed. Day Chairs: Ann Lucena (lead), David Behring, Sumita Bhandari, Kathy Chiverton, and Paige Meyer
View Calendar
Add